Bhanu Choudhrie was born in June 1978 in New Delhi, India. He has built his career through his work as a strategic investor, philanthropist and as the founder of C&C Alpha Group. Mr. Choudhrie oversees investments in industries such as real estate, healthcare, aviation, banking, utilities, and hospitality. As the founder of C&C Alpha Group, Choudhrie’s investment strategies help to both incubate new companies and to drive mature businesses to reach their objectives.

In 2001 Bhanu Choudhrie founded C&C Alpha Group. Through his leadership, the group has developed a large and profitable investment portfolio, with a reputation for successful investments in emerging markets such as India and the Philippines.  Choudhrie is an active entrepreneur with several positions on executive boards. In the United States, he presently serves a Member of the Board of Directors, as well as sitting on the Executive and Risk Committees for Customers Bancorp. ​Prior to its acquisition by Ameris in May 2018, Mr. Choudhrie was also a member of the Board of Directors for Atlantic Coast Financial Corporation. Bhanu Choudhrie has also served on a number of committees for the firm during his tenure including the Executive, Capital, Compensation, Audit and Governance & Nominating Committees.

Over the course of his career, Bhanu Choudhrie has received a number of awards for his contributions to society both as an entrepreneur and a philanthropist. In 2008, the United Kingdom’s Asian Voice Political and Public Life Awards recognized Mr. Choudhrie as their Entrepreneur of the Year.   Bhanu Choudhrie has taken an active role in many philanthropic organizations; in particular, he has been often recognized for his work with Path to Success which seeks to: help those who can’t take education for granted and to support individuals with long term health concerns and limited financial resources. 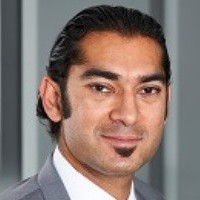